Haifa was the first city in Israel where in 1977 an asylum for women who had suffered from domestic violence appeared. Since those days thousands of women beaten and raped by men could find help and real support there. This very experience is now used by participants of municipal Forum on the fight against domestic violence, as well as by various associations, youth, women movements and nonprofit organizations all over the country. 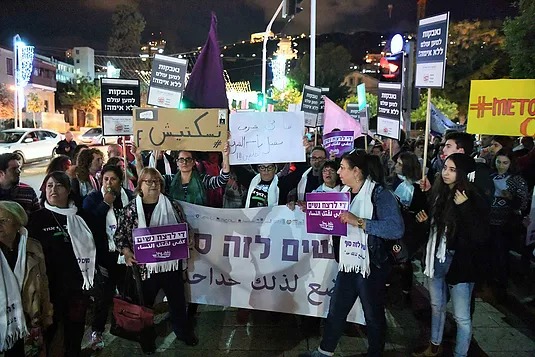 On the International day of fight against domestic violence hundreds of women went out in the streets of Haifa. In the central boulevard Ben-Gurion a protest march against violence against women was held with the following mottos: «We want justice, and not indulgence», «Harassment requires no consent» and «Violence against women is a social disease».

Any women no matter what her financial status, nationality or religion are can become a victim of violence. And in a multinational Haifa women who live in close religious and national communities more and more often require special psychological, medical and financial support. They stay one on one with their misfortune and their problems more often than others. In order to protect them there is a Center of emergency care arranged in Haifa to help women from various religious confessions, an asylum for orthodox Jewish women is opened.

There is a group in Facebook in Arabic which is called «Don’t keep silent» and devoted to Arab women. Women from Druse, Bedouin and Ethiopian communities also need help. It is not rare that Russian, Ukrainian women, new repatriates, tourists and illegal workers of all kinds of religions and nationalities have two strikes against. When they come to the asylum it turns out that 8 to 10% out of them are pregnant, and are at different terms of pregnancy. Many women say that they were raped while being pregnant. Others say that they were beaten and that caused miscarriage or child’s illness.

Many young women suffer from anorexia or from overweight. These two extremes are typical of violence victims. Most part of women needs medical help. Some of them have flew, while others have have gastrointestinal disturbances, and some of them require an immediate examination of gynecologist. Many women have beating signs and need help of a dentist as their teeth are either broken or knocked out.

Almost all of these women have diseases at an extensive stage, such as high blood pressure, diabetes, hysteria and psychiatric problems. All these are caused by fear in which they had to live for years. They need protection, help and shelter. They need information on their rights, legal aid, medical aid and alternative medicine treatment.

Previous Jews and pirates! All aboard!
Next A city with a view of the sea and clouds