A bronze pot with 24 rare golden coins, which are about 900 years old, and a golden earring were discovered on the eve of Hanukkah in Caesarea National Park.

This find is evidence of one of the saddest pages in the history of Caesarea – the cruel conquest of the city by the crusaders. Some of the residents hid their savings, hoping to save them, but never returned.

“The coins we found,” says Dr. Peter Gendelman, the head of the excavations at the Israel Antiquities Authority, date from the end of the eleventh century, which allows us to associate the find with the conquest of Caesarea by the Crusaders in 1101. It was one of the most dramatic moments in the medieval history of the city. According to modern written sources, most of the inhabitants of Caesarea were killed by the army of Baldwin I, king of the Kingdom of Jerusalem from 1100 to 1118. Obviously, the owner of the treasure and his family died as a result of the massacre or were sold into slavery and therefore could not take their gold.

Gold near the well

Gold was discovered during excavations between two stones not far from the well dating back to the time of the Abbasid and Fatimid dynasties, about 900 years ago. The well was located in the courtyard of an ancient public building on the territory of a sacred complex built by King Herod the Great more than two thousand years ago in honor of the Roman Emperor Augustus and the goddess Roma.

“Now this rare find,” says Michael Karsenti, CEO of Caesarea Development Corporation, will be on display at the port of Caesarea.

Golden coins and earring is the third sensational find on this excavation site. In the 60s, a pot of golden and silver jewelry from the same period was found here. And in the 90s, scientists found a collection of bronze vessels. These artifacts are now stored in the Israel Museum in Jerusalem. “The treasure is a unique combination of coins that have never been seen before in Israel,” says the expert of the Israel Antiquities Authority, numismatist Dr. Robert Kulu, 18 Fatimid dinars and six Byzantine gold coins. Dinars have never been found in Caesarea. It was the standard local currency of that time here. But rare Byzantine coins are of particular interest to scientists. Five of them belong to the reign of the Byzantine Emperor Michael VII Doukas (1071-1079). These coins did not spread locally and indicate possible contacts and trade relations between Caesarea and Constantinople. One such golden coin is equivalent to the annual salary of a simple farmer of that time. So the one who hid the treasure was a wealthy person or was engaged in trade.

The treasure was discovered during the final stage of a major project, on which archaeologists from Caesarea have been working for more than two years. This is the excavation of the huge repositories of the Port since the peak of the fame of Caesarea. In addition to the excavations in the repositories of the temple of Herodion, work is underway at the site of the ancient synagogue, where a unique mosaic floor has been partially restored.

Ancient Caesarea has been preserved in all its glory and never ceases to amaze scholars and lovers of history. Its exciting and fascinating story is revealed more and more. Each year, the national park attracts hundreds of thousands of visitors from Israel and other countries.

Millions from the Rothschild Foundation

More than 150 million shekels invested the Edmond de Rothschild Foundation in the search for the hidden treasures of Caesarea, in the preservation and modernization of this most important World Heritage site in Israel.

“The found treasure confirms the correctness of the foundation’s decision to allocate an unprecedented amount of more than 150 million shekels to preserve and restore the Old City and the port. – Said the Deputy Chairman of the Edmond de Rothschild Foundation, Guy Swanski, – This is another important contribution of the Rothschild Foundation to the development of tourism and employment in the area of Caesarea.

Million excavation and conservation projects for this site were sponsored by the Edmond de Rothschild Foundation in collaboration with the Caesarea Development Corporation, the Israel Antiquities Authority and the Israel Conservancy and Parks Committee.

– It is symbolic that golden coins were discovered on the eve of Hanukkah. – says the CEO of the Caesarea Development Corporation, Michael Karsenti, – For us, this is certainly a “miracle” – “Chanukah”, and evidence that even greater treasures are hidden in Caesarea.

Previous By taxi without a driver 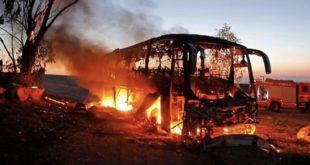 Will troops be sent to Gaza?